Budgeting in the Redesign

Since 'budgeting season' is in full-bloom, we want to outline how to create your proposed amounts and how to apply them as initial estimates for the next year. To view a demonstration of the Budgeting process, please click here to see a recent 'Fridays with Fiscal' demonstration given to ITC Fiscal Support staff.  For a more detailed step-by-step guide, please click here.

The creation of a single scenario is sufficient.  Special circumstances may require more than one scenario based on different assumptions.  For example, you may wish to create a scenario for "Assuming Levy Passes" and another "Assuming Levy Fails".

Each scenario consists of one or more budgeting spreadsheets.   A district may choose to use a single spreadsheet containing all accounts, or create separate sheets for different management areas.  For example, you may create a sheet for the high school, each elementary building and athletics.  Each principal or supervisor could work on their own portion of the budget.  Once the budgets are completed they can be loaded back into the system. 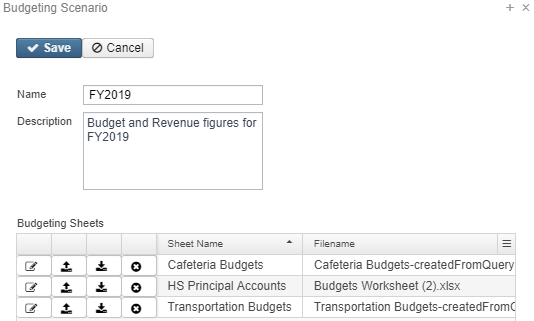 Click on 'Create' to create a spreadsheet within the budgeting scenario customizing the properties and filtering (specific account codes) you want included on your spreadsheet.  Save the spreadsheet and it will appear under the 'Budgeting Sheets' grid on the Scenario.

You can then access the spreadsheet using one or more of the following options in order to add proposed amounts:

Upload Budgeting Spreadsheets into the scenario

Once a scenario is completed, it can be "promoted" to the proposed amounts field on the budget and revenue accounts.  Promote includes all spreadsheets in the scenario

Once a Scenario has been promoted, the accounts with associated amounts will appear under 'Proposed Amounts' under the Budgeting menu (below) as well as the Next Year Proposed Amount field under the Expenditure and Revenue tabs of the Accounts option under Core.

The grid contains separate tabs for existing 'Proposed Budgets' and 'Proposed Anticipated Revenues' amounts based on the fiscal year selected.  You can:

Allow for the creation, copying and mass changing of calendars. There is a Day Count Totals feature giving you totals for specific time periods as well as a custom date range option.  Job Calendars are necessary before new contracts are created for an upcoming contract year. Click here for more information about Job calendars

Just a reminder for those of you who have registered for the Redesign session set for April 23rd (prior to OASBO), the day will be divided into three sections:

The sessions will provide helpful hints. effective shortcuts, and report creation and usage techniques.  The Panel Discussion includes treasurers and their staff who are currently on the Redesign.  They will be discussing their experience with the migration and software.

The session will be held in Room C172 of the Columbus Convention Center.  We have reached maximum capacity for the session so we are no longer taking registrations.  We want to thank everyone who has registered for the session!  See you then!

The Five Year Forecast program is located under the PERIODIC menu.  It allows the user to extract forecast data for the fiscal year that is current.

There are two options available 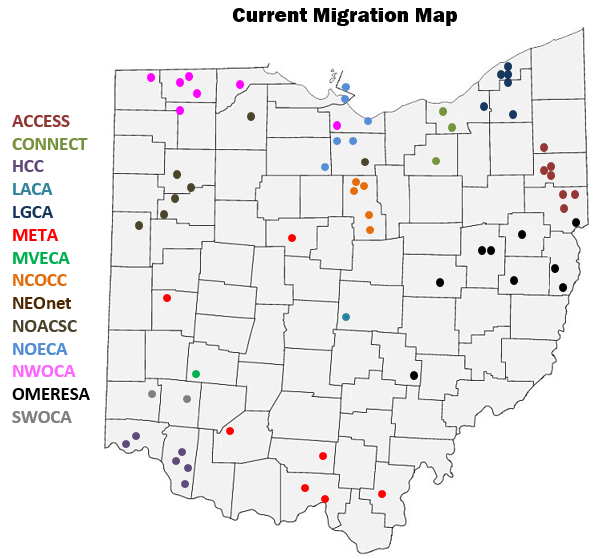